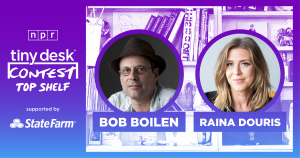 Jonathan Burkes (aka Jawnee), co-founder and bassist of Piel, had the instinct to throw the band’s hat in the ring for this year’s Tiny Desk contest. This led Piel to join the “Tiny Desk Contest Top Shelf” series for 2020, selected by the contest’s judges. The band will be discussed this Thursday June 25, noon Pacific/3pm Eastern.

From an A&R perspective, there are very few acts that have the goods to go on to have a successful music career, but as a former NBA head coach once said about talent, “there’s plenty to go around.” Still, to make it this far in a very competitive contest (some acts have entered Tiny Desk multiple times over the years) and being selected out of so many entrants makes a statement.

The first step in the selection process for Tiny Desk is to submit a live performance video. Like any contest, there are rules and regulations and Tiny Desk is no exception. One of the rules is that the video must include a desk of some sort (I’ll leave that story for you to research) and Piel showcased their desk while they performed their EDM-style song “Custodian.”

Months went by after the initial submission, but then in April the band was informed that they had made the next cut.

Tiny Desk got thrown off its axis this year when the COVID-19 virus hit. This compelled the contest managers to pivot to another way to keep the contest relevant, but keeping all parties safe. This year, judges created Top Shelf, leading Piel to join the “Tiny Desk Contest Top Shelf” series. The weekly series highlights some of the contestants, where the judges discuss the music of some of the nominees and invite not only the talent to interact on the Top Shelf Youtube live page, but welcome fans and others to weigh in, as well.

Judges Bob Boilen of Tiny Desk and WXPN’s Raina Douris will lead Thursday’s event, which is the third installment of the eight-part series.

The aforementioned Jawnee, as well as Piel co-founder and lead singer, Tiki Lewis, will also be participating in the event. Viewers are encouraged to RSVP for show reminders.