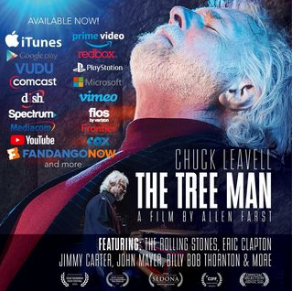 Michael James mixed two Eric Church songs that are in the just-released film documentary “Chuck Leavell: The Tree Man.” Leavell, the legendary pianist/keyboardist whose career spans five decades and includes work with The Rolling Stones, The Allman Brothers Band, Eric Clapton and John Mayer, to name a few, is revealed as more than a musician; he is also a custodian of the environment with commitment to family. (Coinciding with his environmental efforts, Leavell is co-founder of one of the most informative websites on the environment, Mother Nature Network.)

James came into the project through the film’s director, Allen Farst, who has hired James in the past to compose music for industrial projects and commercial ads. Some of those projects include Cessna and Dodge Ram.

Birth of “The Tree Man”

Farst’s journey of the Chuck Leavell project began in 2017, when Farst began traveling to various cities to interview not only the film’s leading man, but Bonnie Raitt, president Jimmy Carter, Eric Church and many others. It is two Eric Church songs that the country star performed live, in which James was enlisted to mix. The songs are “The Load Out” and “Ain’t Wastin’ Time No More” (an Allman Brothers cover). Farst, obviously was happy with the mixes and the word is Church is happy, as well.

According to James, he was contacted by the Ohio-based producer/director during the nascent stages of the film’s development, but James’ role, at the time, was not defined; however, when the time came for the northern California-based writer/producer/mixer’s talents to be used, James got the call.

“Chuck Leavell” Accolades and Beyond

The two mixes by Michael James for Chuck Leavell, by all accounts, went well. As far as critical nods to the film, that too has gone well. The film has already won multiple festival awards, including the People’s Choice Award at the Sedona Film Festival, earlier this year. The film has made it into some theaters, but due to COVID-19, it’s probably easier to access the film through the various VOD platforms. Here is the trailer to the film.